A look at some records that could fall this year at the WGC-Mexico Championship.

Which three players you should have on your Fantasy Race to Dubai team this week at the ISPS Handa Vic Open.

Geoff Ogilvy heads the lengthy list of Australians when he tees off at the 13th Beach Golf Club on Thursday.

The inaugural Saudi International powered by SBIA saw several players making strong strides in the Race to Dubai with China’s Li Haotong chief among them after finishing runner-up to the USA’s Dustin Johnson in the historic event at Royal Greens Golf and Country Club.

Andrew Johnston believes he is close to returning to his best as he tees up at the ISPS Handa Vic Open for the first time in Melbourne.
An interactive look at the best facts and figures from Dustin Johnson's victory at the Saudi Arabia International.
Decide who should be Hilton Golfer of the Month for December/January and be in with a chance of winning a one-night stay at a Hilton Hotel of your choice, anywhere in the world. 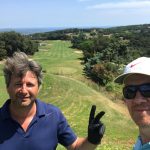